Scratch, scuff and weather resistant, domed labels can be used indoors or out and are available with permanent adhesive or magnet backing. TLP’s capabilities ensure great dome label results with special attention given to each component: 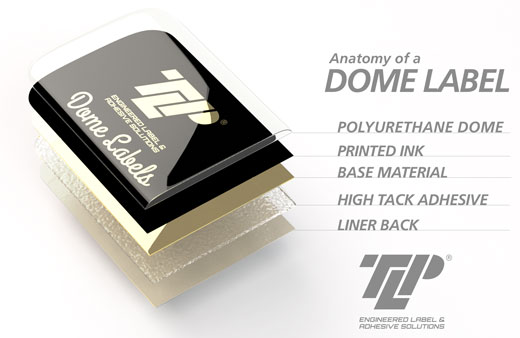 Why consider a Dome Label for your application? Here are just a few of the advantages:

A domed decal is a label that has been coated with a clear polyurethane compound to enhance the label and give it a three-dimensional appearance. Sometimes referred to as bubble labels or gel labels, domed decals are mainly used for their unique appearance but offer other benefits such as weatherproofing and chemical resistance.

Domed labels are produced by printing images onto labels and then pouring a mixture of clear liquid polyurethane on top of the label. The decals then need to sit a few hours for the polyurethane to fully cure into its permanent three-dimensional shape.

A domed decal is a label with a three-dimensional layer of clear polyurethane resin compound resting on top of it to give it the appearance of a “bubble” whereas an embossed label is where elements of a label (usually text or images) are raised above the surface of the rest of the label. A common example of an embossed label is a wine label where you can feel the pattern and text that are raised due to the embossing process.

Yellowing or discoloration of domed decal labels can occur depending on what doming liquid a manufacturer chooses to use. If a label manufacturer creates domed decals with epoxy resin instead of polyurethane, the domes can harden, yellow, and shrink over time. However, TLP uses automotive-grade polyurethane that prevents discoloration and will maintain its physical properties over time. Epoxy resins are often used due to it being cheaper than polyurethane, but they will not last in their ideal state, unlike polyurethane labels.

Contact Tailored Label Products to discuss your dome label project application. We’re ready to talk about our in-house manufacturing process and the unique characteristics of utilizing polyurethane doming for your application. Reach out to us today!